Blockchain and Autonomous Vehicles - A Recap of Distributed: Trade 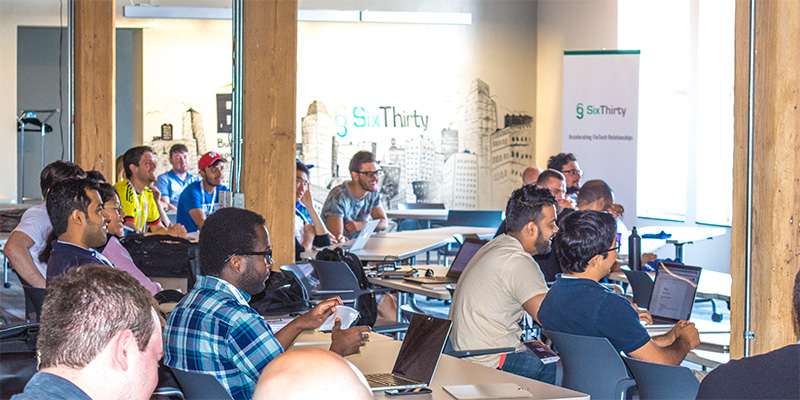 This is a guest post by Lamar Wilson, CEO of Fluent.

Fluent, in concert with Thomson Reuters, SixThirty, and BTC Media recently hosted and sponsored Distributed: Trade, the first blockchain conference focused on optimizing trade & financial networks. Located at the Olin Business School at Washington University in St. Louis, 38 speakers presented to over 300 attendees at the first event of its kind in the world.

The conference succeeded in bringing the industry’s leading blockchain technology companies together with major enterprises to address how the new technology will disrupt and optimize capital markets, financial services, payment settlements and supply chain management. Conference sessions were divided into two tracks: one focusing on financial services and the other on supply chains, keeping the conversation rooted in real world use-cases in each industry.

Participants in the conference and hackathon included Brian Behlendorf, Executive Director of the Hyperledger Project, Gurvinder Ahluwalia CTO of Cloud Technical Solutions at IBM, Jeff Garzik, Bitcoin Core Developer and Cofounder of Bloq, and corporate sponsors like RGAx, State Farm, EY, and Thomson Reuters. It was a tremendous opening to what will surely become one of the premier blockchain conferences for both trade and financial services.

Just 40 hours prior to the conference was the inaugural Distribute Trade Hackathon, sponsored by Thomson Reuters, RGAx, and State Farm, that brought together teams from across the country to have fun, innovate, and compete for $25k in prize money. Hosted at the TREX co-working space in downtown St. Louis, teams collaborated to build government compliant digital identity tools (DIID), eliminate the black market blood trade (BloodChain), and create various smart contract applications on the Ethereum platform.

Fluent joined the Thomson Reuters team melded minds and created the future of ridesharing and crowdfunding to foster financial inclusion in local communities.

In 24 short hours (throwing regulatory and compliance concerns by the wayside in the name of fun…), Fluent and Thomson Reuters created BotVest, the future of individual community investment in autonomous vehicles. Built on the Ethereum platform, BotVest allows anyone to buy shares in autonomous “taxi” or uber vehicles which send out programmatic dividends after each successful ride. Patrons pay in cryptocurrency for their ride and the vehicles hold enough value in reserve to pay for gas and repairs, releasing excess funds to the “shareholders”. The vehicles can even self-recycle at the end of their lifecycle, dispersing the resell value to each investor. In this way individuals have the ability to invest in services in their local community at the touch of a button.

Fluent’s inspiration came from a simple idea. Traditionally the only “investments” easily accessible to lower income individuals in their local areas are very exploitative with extremely high risk and high returns. Instead of buying lottery tickets or gambling, anyone can invest as little as $100 into a low risk investment with consistent returns that can benefit your community and each member in it. By lowering the barriers of entry it is possible to provide financial empowerment to the people who need it most. Additionally, keeping profits and investment dollars locally can help a small community sustain itself even with workforce consolidation that occurs with new technology.

This same BotVest technology can be extended to other machines and devices as well. Imagine a lawnmower, available by request in your neighborhood funded by a group of local kids. This lawnmower can even extend its geographical footprint by requesting pickup from a BotVest car and pay that car in cryptocurrency for a lift to its next job. This blockchain based machine-to-machine commerce is a snapshot of the future and could provide huge increases in efficiency while in this case, still allowing profits to stay in the local community.

But mostly, the Fluent team had a blast collaborating with the brilliant minds at Thomson Reuters and bouncing ideas off of all the talent brought together at the TREX coworking space in St. Louis. All 16 teams produced fantastic ideas and made the hackathon a truly special event to behold. The team can’t wait until next year! A huge thank you to Atul Kamra of SixThirty, and Dave Bailey of BTC Media with whom the event would not have been possible, and the entire team at Thomson Reuters who continue to challenge our conceptions of the role of large enterprises in innovation.