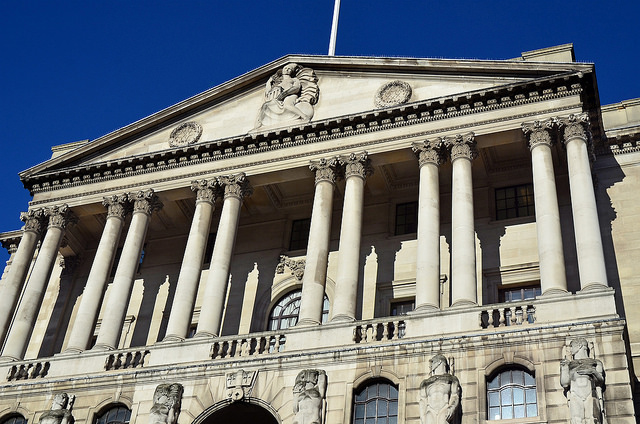 The paper, titled “The Macroeconomics of Central Bank Issued Digital Currencies,” is classified as a staff working paper and carries the disclaimer, “The views expressed in this paper are those of the authors and not necessarily those of the Bank of England or its committees.” However, this is hardly the first time the BoE has elaborated on CBDC.

“The distributed ledger is a genuine technological innovation that demonstrates that digital records can be held securely without any central authority,” reads the conclusion of a BoE research paper titled “Innovations in Payment Technologies and the Emergence of Digital Currencies,” published in 2014. The “One Bank Research Agenda” discussion paper, issued by the BoE in February 2015, noted that blockchain fintech could reshape the financial industry and called for further research to devise a system that could use distributed ledger technology without compromising a central bank’s ability to control its currency. In September 2015, Bitcoin Magazine reported that Andrew G. Haldane, chief BoE economist, hinted at the possibility that the U.K. government might issue a digital currency.

“[If] distributed ledger technology could provide a more efficient way for private sector firms to deliver payments and settle securities, why not apply it to the core of the payments system itself?” said BoE Governor Mark Carney in June. “The great promise of distributed ledgers for central banks is their potential to enhance resilience. Distributing the ledger means multiple copies of the system. It can continue to operate if parts get knocked out. That removes the single point of failure risk inherent in a centralized system.”

Carney revealed that the BoE was launching pilot projects to study the challenges that need to be met before distributed ledgers can be used in central banking.

In the new paper, using the pre-crisis United States as a case study, BoE economists John Barrdear and Michael Kumhof argue that CBDC could give a 3 percent boost to the economy while reducing real interest rates, distortionary taxes, monetary transaction costs and providing the authorities with more effective tools to manage the economy. The BoE economists used a monetary-financial Dynamic Stochastic General Equilibrium (DSGE) model, calibrated to match the U.S. economy in the pre-crisis period and extended to add features related to CBDC, to study relevant policy issues, including the efficiency gains and stabilization effects of CBDC.

Besides the BoE, other central banks, including the Bank of Canada are studying the potential of distributed ledgers.

“Were central banks to issue digital cash and make it available to the general public, money would exist electronically outside of bank accounts in digital wallets, much as physical bank notes do,” says The Wall Street Journal. “This means households and businesses would be able to bypass banks altogether when making payments to one another.”

An interesting consideration is that CBDC based on distributed ledgers would permit policy-makers to completely control the amount of money in the economy, much like full-reserve banking, which is not possible right now because private banks can create money on their own.

Barrdear and Kumhof argue that “permissioned” distributed ledgers could avoid many of the shortcomings of open, public distributed ledgers, while still retaining many of the benefits. “One possible application of such a permissioned system would be the issuance of a central bank digital currency (CBDC) — universal, electronic, 24×7, national-currency-denominated and interest-bearing access to a central bank’s balance sheet,” note the conclusions of the paper. “[We] find that a system of CBDC offers a number of clear macroeconomic advantages with few obvious large costs.”

Broadbent confirmed that the BoE is considering CBDC in preliminary investigations but with a cautious approach. “If you are talking about an all-singing, all-dancing central bank digital currency replacing not just the liabilities we currently handle, but prospectively substituting it for commercial money, then yes, that is a long way off,” he said. “That is not just about technology; that would be a matter for the shape of the financial system.”

Despite the cautious remarks of Carney and Broadbent, the fact remains that the BoE is examining CBDC with possible future implementation in mind, as shown by the new BoE working paper. The efficiency gains and stabilization effects of CBDC could be part of the means that the U.K. government is considering to mitigate the post-Brexit economic turmoil that is expected to follow when the U.K. separates from the European Union. An International Business Times article titled “House of Lords to Ask Bank of England: Is It Time for ‘Britcoin’?” is among the first to emphasize the link.