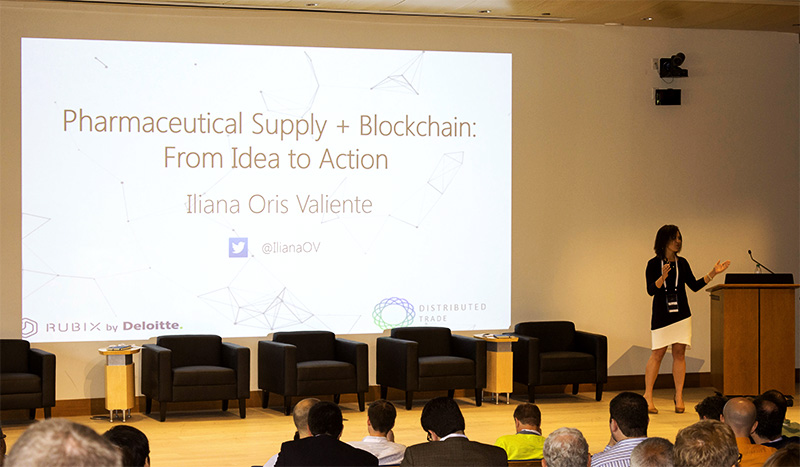 “Within one value chain – the pharmaceutical supply chain for drug products – many use cases exist across the board where there’s an opportunity to leverage blockchain technology. Why? Because in this value chain there are many points where processes break down due to a lack of transparency and coordination,” noted Iliana Oris Valiente, cofounder of Deloitte’s Rubix blockchain team, during her keynote presentation at the Distributed: Trade conference, which took place on June 14 in St. Louis, Missouri.

Oris Valiente characterized the Toronto, Canada-based Rubix group as a technology-focused team that develops the code to power next generation Decentralized Applications, while noting that Deloitte itself has the largest supply chain advisory practice worldwide. Oris Valiente used her presentation to map out some of those use cases and to explain how blockchain technology, and especially its ability to record provenance, might be applied.

Provenance – tracking of assets across a supply chain – has emerged as an early application area for blockchain and solutions in the area have been proposed by a number of startups, including CargoChain, Chronicled, Everledger, Project Provenance and Skuchain.

For her presentation, Oris Valiente focused on blockchain in the healthcare space; particularly on the supply chain of pharmaceutical drugs. She identified three use cases that could benefit from the application of blockchain technology:

Beginning with drug safety, Oris Valiente made a number of observations and points, including:

Continuing to cover drug channels, Oris Valiente noted a key issue. There are many links in the supply chain with multiple, incompatible legacy computer systems and so there is little visibility for manufacturers into end-customer sales by pharmacies. Components of this messy situation include:

Finally, addressing public safety, Oris Valiente commented: “This exercise of reviewing the pharmaceutical supply value chain isn’t all about the enterprise and their profits. It’s really about understanding where this value chain breaks down and the ultimate toll it has on the broader population. Technology considerations and choices aside, that is the real problem we’re trying to address.”

Among the public safety issues that blockchain technology might impact are:

Turning to the practical paths forward to implement blockchain in the pharma supply chain, Oris Valiente suggested that across her use cases, there were a number of commonalities, including a number of entities involved in each supply chain and that each would have a different world view and set of motivations to innovate.

“Addressing existing supply chain problems,” said Oris Valiente, “needs to be tackled in a number of steps. One of the key messages I want to convey is that we should atomize the problems we seek to solve, while keeping our eyes on the bigger picture. For starters, we don’t need to follow the pharmaceutical drug product from its ingredients down to the patient’s pillbox, just yet.”

Interestingly, Oris Valiente, sees an eventual world where a number of supply-chain-oriented private and consortium blockchains co-exist with public blockchains playing a role “to anchor and act as the trusted system relied upon by the consortium network participants.”

For its part, Oris Valiente’s group – founded in 2015 and officially known as Rubix by Deloitte – is positioning itself to help build out the business applications that would underpin blockchain-based supply chains.

Indeed, the group last week spun out a portion of its team involved in its own Ethereum-based blockchain infrastructure in order to allow this component to grow faster by tapping into external capital. This also allows the core Rubix group to remain blockchain technology agnostic. The new company, dubbed Nuco, is headed by former Rubix group members Kesem Frank, Matthew Spoke and Jinius Tu. Deloitte is expected to retain a minority stake in Nuco.