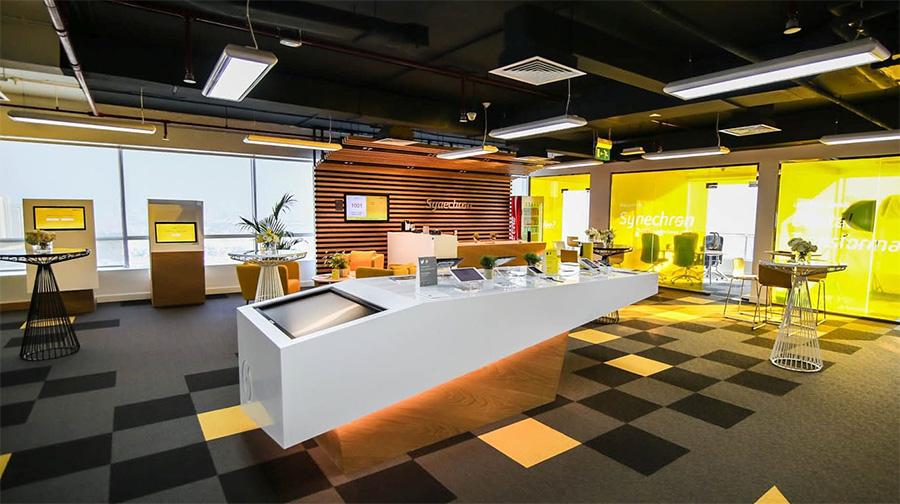 The transition from “talking” about blockchains to “walking” with them is increasingly cited as a required next step for 2017. To that end, financial services IT specialist Synechron has released a set of “accelerators” that will enable firms to deliver early blockchain-based apps faster, more affordably and with less risk.

Synechron was founded in 2001 to bring financial services domain knowledge together with technology expertise to address critical business challenges, particularly within the banking industry. The company has invested heavily in R&D and has dedicated a 50-person team to blockchain innovation. Distributed spoke with Sandeep Kumar, managing director, capital markets, to get the detail on the accelerator program, the focus of its first application and the technologies it has selected to underpin it.

Q: What is your POV on how blockchain technology is going to impact the financial services space in the next five years?

A: We believe that, much as cloud came in and changed the financial services industry, blockchain has a truly transformative potential. While change will not happen overnight, over the next five years, leading global financial institutions will partner in consortiums and small working groups of two to three banks and intermediaries to develop blockchain projects that coexist alongside existing business operations.

This will allow technology operations to develop and businesses to evolve and gain the critical mass needed for the network effect of blockchain. Middle and back-office operations that are inefficient, as well as fragmented businesses that are susceptible to fraud, will see the most change due to blockchain.

The technology-driven companies most impacted will be intermediaries like KYC utilities, credit rating companies, collateral management companies, market data providers and services providers to sell side and buy side – which have an opportunity to evolve their business models. These accelerators can help them gain a faster time to market around initiatives in these areas.

Q: Why do you feel there is a need for such accelerators?

A: As with any new exciting technology, blockchain investment is on the rise. …. Greenwich Associates project[s] global financial institutions and technology providers will spend more than $1 billion in 2016 on capital markets blockchain applications. With the growing investment and enthusiasm has come a frantic need to be one of the herd, leading firms to act quickly or risk being left on the sidelines. This fear of missing out on blockchain (Blockchain FOMO) is understandable – the stakes are high and the technology is moving quickly, but frankly, many financial institutions don’t know where and how to start.

Q: What does an accelerator typically consist of in terms of what is delivered to a customer? And what is the commercial model under which the accelerators are licensed?

A: Synechron’s blockchain accelerators are pre-configured applications available in a cloud environment that deliver working modular code and a sandbox environment to minimize development time, infrastructure and investment. These applications use an agile design approach and industry-leading blockchain technologies, such as Ethereum, Hyperledger, Eris and Ripple. Additionally, because Synechron’s blockchain apps are available via the cloud for an enhanced delivery model compatible with today’s hybrid cloud environment, firms do not require additional infrastructure cost and can get to market faster.

Synechron provides two distinct commercial models. 1. Lab for hire – This provides a T&M-based approach to develop custom blockchain for clients and the scope can change as per customer’s requirements. 2. Fixed scope – The customer provides the scope and Synechron provides a fixed price delivery of blockchain custom-built for the customer’s needs. Customers receive the accelerators as part of a consulting services engagement.

A: Synechron’s blockchain accelerators are plug-and-play applications. Customers can plug nodes directly on top of them, or start building on top of them in a sandbox development environment. Synechron can work with customers to understand how the accelerator might plug into existing, legacy technologies.

For example, our smart margins accelerator connects to OpenGamma, which offers market risk management software, in order to determine an authoritative price for smart margins.

The accelerators cut down time spent on experimentation of various blockchain platforms, developing transaction flow. The customer would be responsible for providing the business use case, interface specifications and deployment environment.

Q: Can you estimate the benefit to the customer in terms of development time or time to market by leveraging your accelerators?

A: Synechron’s blockchain accelerators will allow financial institutions to be up and running on a blockchain in weeks. We are able to achieve this by offering pre-configured applications already customized to modular business cases. Using our specialist financial services knowledge, we’ve reimagined today’s business operations to create a new blockchain workflow within our applications that cuts out the initial discovery and development work that can take months. By hosting the applications in the cloud, we’re able to provide an enhanced delivery model compatible with today’s hybrid cloud environment, and therefore, firms do not require additional infrastructure cost and can get to market faster.

Q: What are the application focuses of the six accelerators that you have released thus far? And why these areas?

We have focused on the most inefficient parts of financial services, such as trade finance, which is 10+ years behind the current technology curve. These areas are overdue for a technical refresh and blockchain can be a great choice for the new architecture. We have also focused on use cases like know your customer  (KYC) and margin calls where the ecosystem can really benefit from the network effect of a blockchain-based system.

We’ve found mortgage servicing, trade finance, margin calls, KYC, payments and insurance to have the most relevance because these businesses have decentralized operations and involve payments and paper contracts – and therefore benefit most from digital currencies, digital ledgers and smart contracts.

Q: Can you drill down and describe the pain points that applications would look to address?

A: Synechron’s blockchain accelerators include:

To drill down further on a couple of application areas …

Looking at trade finance, this industry today is a $7.6 trillion business, with an expected CAGR of 3.29 percent over the next three years. It is a core business for all global, Tier 1 banks. Yet, trade finance today is also 10 years behind modern technology – it is manual and document intensive – and breaks in business cycles inhibit visibility and amplify challenges such as financial crime. Trade finance fraud costs businesses an estimated $14 billion a year (according to Bloomberg)…20 percent of banks in a 2015 survey by the International Chamber of Commerce reported an increase in fraud allegations.

Right now, the most commonly used trade finance workflow is a complex 15-20+ steps to achieve a letter of credit (LC): from the agreement between the buyer and seller and application for the LC opening, through risk and compliance and procedures, all the way to payment of the LC. Data processing times are huge, and whether trades are settled in T+35 or T+3, the movement to reduce settlement times in the existing environment will not be solved by incremental changes. Something bigger is needed – like the blockchain.

Blockchain is uniquely positioned to rethink this highly decentralized, paper-contract, payment-based market. And, industry initiatives are underway, but to be truly effective, they will need to scale at massive levels. This means buy-in from banks, intermediaries and service providers – really anyone who touches the workflow – is a must for blockchain in trade finance to become the new industry standard.

In the case of the OTC market and smart margins, increased margin requirements for uncleared derivatives coming into force over the next few years are forcing firms to reevaluate their derivatives margining activities and the collateral life cycle. Currently, it takes extensive manual intervention to source and move collateral, resulting in extended timelines, higher costs, human error and valuation disputes. According to the Depository Trust and Clearing Corporation (DTCC), discussions with OTC derivative market participants indicate margin call activity could increase up to 1000 percent.

That is one reason the industry expects more collateral to be exchanged. With increased reserves needed, banks need to make that process more efficient. They’re looking for ways to ease the operational burden, and elevate collateral management to a major business issue with risk management, technology and operational considerations.

A: Synechron conducted an analysis of the top blockchain technologies …best-suited for the financial services industry based on its unique requirements, and selected Ripple, Ethereum and HyperLedger for our initial development work. Our analysis showed that these technologies are particularly strong because they offer public and private blockchains respectively, depending on what the situation calls for, support smart contracts, have the transaction security that financial services organizations desire and have strong support from the development community.

Synechron’s Blockchain Accelerator for Global Payments uses Ripple and is leveraged by many of the accelerators to execute the payment component of the transaction. It draws on the XRP protocol for currency and multi-currency wallet. It is delivered in the cloud via Azure Ubuntu Box.

Q: Are there any limitations imposed on the deployment models of the various accelerators and applications built with them?

A: Synechron’s blockchain accelerator program is meant to help firms accelerate their entry into the blockchain market and their projects. All the accelerators are deployed and available on cloud. As the technology evolves, Synechron is working with blockchain technology providers to incorporate these evolving technologies.

Q: When might you reasonably expect to see customers deploying solutions built using your accelerators?

A: Our accelerators are production-ready, and we’ve seen considerable interest in them. We’ve already completed custom blockchain development work for clients and feel these accelerators will take them to the next level in their blockchain initiatives.