Honeywell-UTC: The Merger that Could Have Been

We consider the implications of the $100B mega-merger that could have been.

ABSTRACT: The aerospace and defense industry has long been dominated by a handful of prominent players – this consolidation has resulted in minimal large scale M&A activity given potential regulatory and customer pushback. A prominent and recent example, the proposed Honeywell and United Technologies merger, reinforces the industry position and considers the value chain implication of a tie up between two leading market players.

While the Honeywell-United Technologies (UTC) merger proposition did not ultimately pan out as predicted through industry consensus, partially driven by heighted regulatory pushback in an increasingly scrupulous antitrust environment, one can imagine and appreciate the $100B behemoth that could have been and the associated implications for aerospace and defense, especially downstream players. 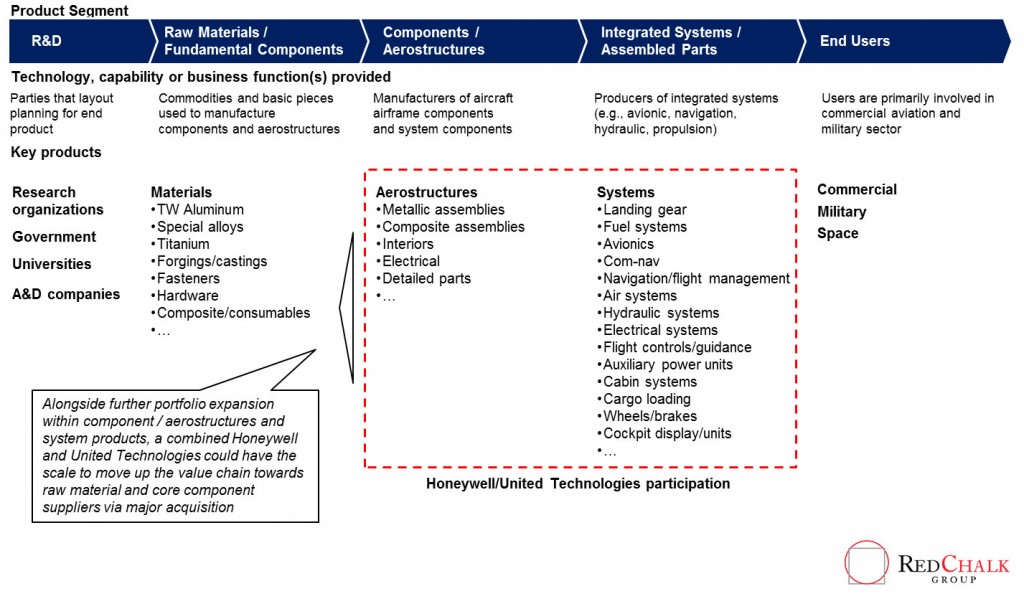 In addition to mounting supplier dominance, the potential merger was expected to generate cost synergies of $3.5B as well as a scaled R&D capacity of $8B+, unlocking significant future investment opportunities while maintaining approximately 10% of the global aerospace and defense product market. A combination would result in disproportionate leverage in the value chain and potentially, continued vertical integration upstream. See Exhibit 2.

This disproportionate leverage is precisely why such a deal was met with resistance by both end-customers and regulatory authorities. CEOs of Airbus and Boeing have pressed back against the idea, stating that Honeywell and United Technologies are major suppliers for both companies, and the reduced competition in their supply chain would act against the companies’ interests. Beyond the private sector, as the U.S. Department of Defense (DoD) is a major customer, government agencies have been drafting proposals to prevent such mergers due to national security concerns. These obstacles are only coupled with the inevitable involvement of anti-trust regulators, which experts agree could only be satiated through select divestitures, challenging shareholder value.

While Honeywell will return to pursuit of smaller scale “bolt-on” M&A, a number of issues remain for parties across the value chain within the aerospace and defense industry going forward: