With Ford Deal, Blackberry Becomes a Front-and-Center Player in the Connected Car Industry

The Ford – Blackberry agreement signals an important turning point for Blackberry as it tries to turn itself into an enterprise software company.

ABSTRACT: Recently, Blackberry announced that they have reached an agreement with Ford to provide their QNX software directly to Ford cars, the first direct deal QNX has signed with an automaker. Ford, which had previously used Microsoft for its SYNC connected car platform, started using QNX software in their SYNC 3 infotainment system in January 2015 and this agreement pulls the companies even closer together. The agreement will expand the use of QNX software, with an emphasis on security software, in Ford connected vehicles.

Previously, QNX had worked with an intermediary tier-one supplier, such as Panasonic, to get their software onto vehicles. Now, Ford is expanding the reach of QNX’s Neutrino operating system as well as working with QNX to develop software that can control other aspects of the vehicle. With this agreement, QNX becomes a tier-one supplier to Ford, as it plans on forming a dedicated team to work directly with Ford to develop features and shorten turnaround time for software development. (See Exhibit 1). This cuts out the middleman between the two companies and signals the importance Ford and other automakers are putting on software. 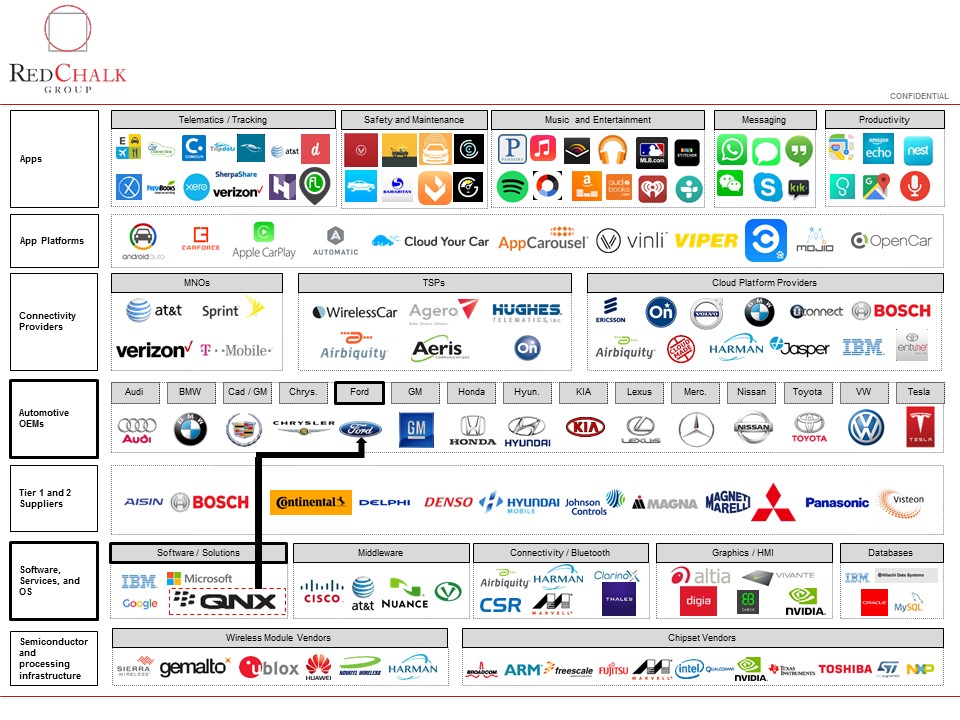 Initially, feature development will be focused around telematics, infotainment and expansion in to the cockpit of the car. The focus of future development will likely be on autonomous driving and security, as Ford attempts to create an autonomous driving system that rivals those of Tesla, Apple and Google, in addition to an increased emphasis on cybersecurity following a spate of hacks and attacks using other Internet of things (IoT) devices.

This agreement could be a turning point for Blackberry as it attempts to pivot away from its ubiquitous hardware business and into the enterprise software business – according to the company, QNX software is used in over 60 million cars, with agreements with over 40 brands, but this agreement puts it front-and-center as a major supplier to the one of the biggest automakers in the world. If this partnership is successful in elevating Ford’s connected cars, other automakers will likely beat a path to Blackberry’s door in short time.