We explore Amazon’s eCommerce growth strategy through the launch of Echo.

ABSTRACT: As the home becomes an increasingly connected environment, eCommerce opportunities are naturally evolving and one company has charted a roadmap that serves as a template. Amazon’s first-mover, aggressive focus on the “connected home” and integration of eCommerce functionality into its platform hub, dubbed Echo, has afforded it a rapidly growing user base, ignited platform wars, and afforded it a new channel to reach its consumer base. We explore Amazon’s approach through device and partnership strategic moves.

While e-commerce has evolved from a nascent stage market to a mature market over the past 15 years, it has finally crossed paths with the emerging connected home – recognizing the connected home as an opportunity increase consumer touchpoints, enable new purchase use cases, and engage consumers more holistically, Amazon launched the Echo platform hub in 2015 and has proliferated the product portfolio with extensions, such as the Tap and Dot, released in 2016.

Echo represents Amazon’s first effort to robustly pursue the connected home and serves as central platform hub, capable of controlling other devices, accessing free information, and enabling another channel for access to paid services (e.g., music services such as Spotify or transport services such as Uber).

Amazon’s aggressive ability to integrate across the connected home, through partnerships with device OEMs such as Philips Hue, Wink, and Belkin Wemo, have afforded Amazon a unique position as a valuable, natural language interface driven (i.e., simple UI/UX), commonly used home tool – ultimately, facilitating the symbiosis of e-commerce and connected home. In an attempt to continue developing value perception by consumers, Amazon has been devoted to continuous growth in the Echo’s “Skills” set, with a current count of over 3,000 skills. This has diversified the product’s capabilities with additional commands and integrations ranging from access to new forms of information to IFTTT functionality.

Perhaps emblematic of Amazon, monetization has been limited in the near-term to hardware sales – data monetization, access fees for device integrations, and subscriptions are limited or non-existent. Near-term monetization is meant to provide enough consumer surplus that penetration and a robust foundation is laid to facilitate adoption of the services enabled through Echo.

Moving Beyond the Home and Device

An aggressive penetration oriented strategy has yielded success for Amazon, with over 3 million units sold as of September 2016 and thus, a foundation now exists that can be exploited for future expansions, well beyond the connected home environment. As a natural link to the connected home, the connected car has garnered interest by OEMs, Tier 1 and 2 suppliers, leading tech players, and application vendors – in this backdrop, Amazon has been hard at work to link the two ecosystems.

Across automotive OEMs, BMW, Ford, and Hyundai have announced models that can be remotely controlled via Amazon Echo for basic, stationary functions (e.g., engine start, temperature control). Again, Amazon has not sought to immediately monetize these capabilities, preferring instead to broaden the consumer base for longer term objectives and relying on device sales for the time being.

Naturally, if Amazon is focused on penetration and the user base, the question remains: what is the company’s long term monetization play beyond the near-term, and seemingly rudimentary, hardware driven monetization model?

The company has long had the opportunity to rollout some form of required payment plan for the plethora of functions its products provide but has refused to do so and according to responses noted by developer communities and other 3rd parties with proposals, has indicated little risk of deviating from this stance.

However, Amazon’s recent Music Unlimited for Echo streaming subscription plan provides a glimpse of Amazon’s future goals focused on recurring payment models for proprietary services or applications dependent on a broader amalgam of device integrations and partnerships, still offered for no incremental price to the consumer. Amazon’s music streaming service caters to an active, Echo daily-user but severely undercuts competing music streaming services at $3.99 per month, and represents the first Echo-based monetization plan with discrete payments. Outlined in Exhibit 1 are the ecosystems Amazon has pursued in addition to the “service expansion” strategy that could represent the long-term monetization strategy for Echo. 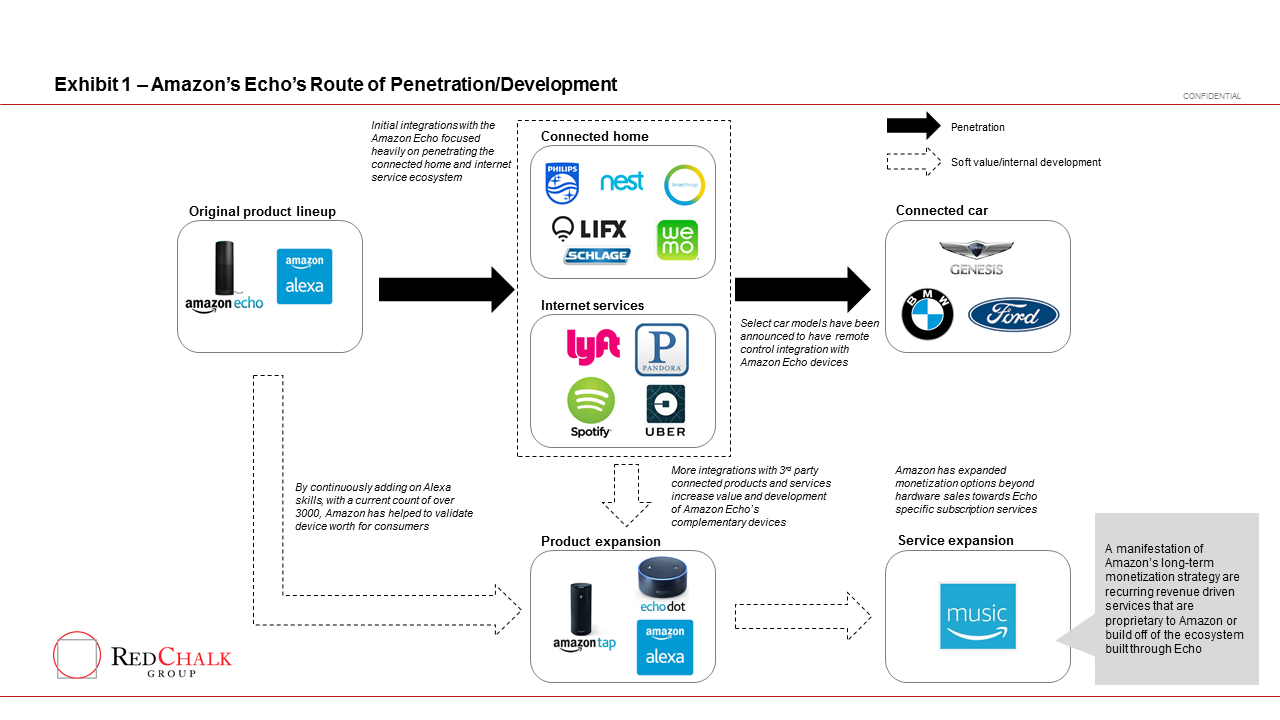 While this offering is still in its early stages, it represents a first step in a broader monetization roadmap that provides an outline of where Amazon may push Echo, Dot, and Tap. It will be worth closely watching Amazon continue to invest in the Echo platform as the competitive landscape evolves.