We explore the new litigation finance industry and how it’s evolved.

ABSTRACT: Enterprise litigation finance is a rapidly growing industry that seeks to provide corporations and law firms with loans to pay for expensive litigation in return for a cut of the damages. In this note we explore the origins of the industry as well as recent developments that indicate an important shift in what types of cases litigation finance firms invest in as well as who these deals are done between

The Emergence of the Market

While the consumer segment of the industry has steadily grown since inception, the enterprise segment was a nominal segment pre-2007. However, the transformation of the multinational corporate legal department after the 2007 recession forced inside counsel to seek out additional cost management tools, including outside financing of litigation – for litigation financiers, pursuit of enterprise level asset financing entails significant upside: core litigation continues to rise between companies across classes (e.g., class action shareholder, antitrust, commercial disputes, intellectual property), assets are generally uncorrelated with other asset classes, and if balanced with the appropriate resources and meritorious litigation, potential exists for large payouts.

Since the early 2000s, the industry has grown rapidly, with players such as Bentham IMF rising to lead in AUM terms. See Exhibit 1. While initial reactions drew the ire of some in the legal profession as there were questions about the legality of these arrangements and concerns about conflicts of interest (e.g., champerty and maintenance), many of these concerns have been assuaged as several successful examples of litigation finance have been executed across the industry. 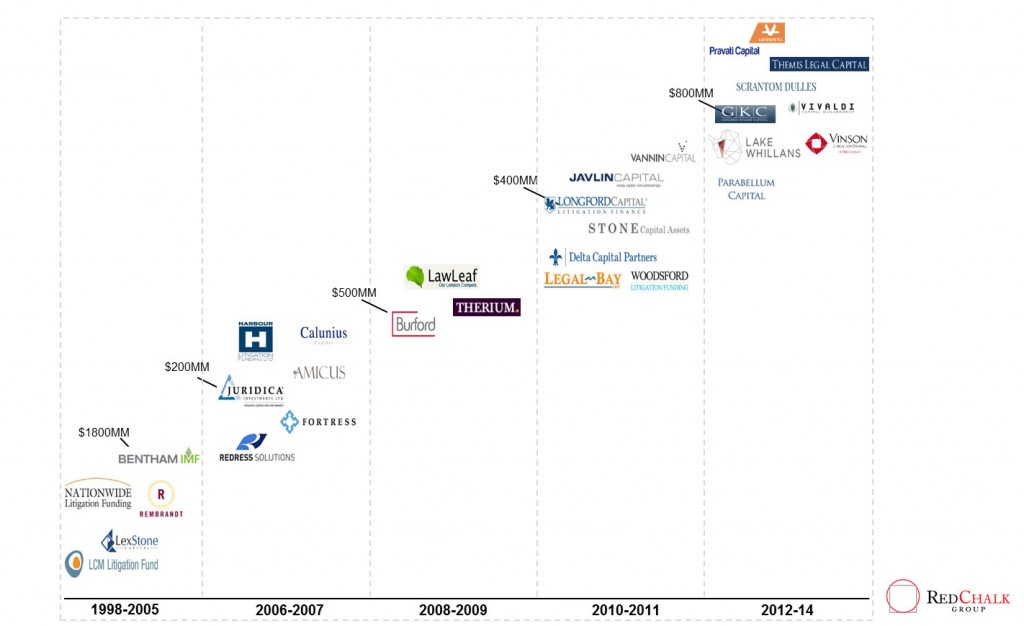 Additionally, some firms have partnered with law firms to finance operations for a percentage of earnings each year and others have looked to funding late-stage litigation, where the claim holder may be wary of appeals and want to cash out immediately. Bentham and Burford, another market leader, have invested heavily in mass torts, both in the U.S and in Europe. The success of these firms has attracted attention from traditional asset managers. Credit Suisse had one of the leading litigation finance teams but was forced to disband the group due to conflicts with its banking operations (since then, the leaders of the group have gone on to start their own firms). Meanwhile, other banks and hedge funds, such as J.P Morgan and Fortress Investments have shown interest in the burgeoning litigation finance field.

At its heart, litigation finance displays the same tenets as most other investments – the firms have to understand the underlying claim asset at the center of the dispute, properly value these assets and determine the probability of various outcomes before pursuing an investment opportunity. With a finite set of cases that meet the requirements of these firms each year, the speed of diligence and accurate valuation of assets and opportunities presented will continue to heighten in importance and will be paramount to any one firm’s success in an evolving landscape.