Media and Entertainment – The Ecosystem Today

In this article, we explore how the Media and Entertainment ecosystem has structurally transformed, and will continue to evolve.

ABSTRACT: The Media and Entertainment Ecosystem has been disrupted by the emergence of OTT (Over The Top) services. As consumers migrate from traditional media and to OTT, the ecosystem is in flux as traditional media companies attempt to develop their own services and pivot their businesses models away from the traditional cable / satellite TV model. Players in the industry also recognize the increasing importance of differentiated content and are vertically integrating, both organically and through M&A.

The Rise of OTT

For years, consumers had limited options to consume visual media (i.e., television, movies) – they could go to the theater, watch it in a limited time window when broadcast, or rent / purchase physical media (e.g., DVDs). As communications and distribution infrastructure has improved, and broadband penetration has reached near saturation levels, a new mode to consume media, OTT, emerged and has disrupted the broader media and entertainment ecosystem.

OTT platforms have taken on a variety of business models: these include PPV services such as Xfinity On Demand, video streaming services such as Netflix and YouTube, as well as TV “replacements” such a Sling and PlayStation Vue.

The rise of OTT is creating a paradigm shift in media consumption habits – consumers desire control of what they consume (short-form, long-form), when they consume (time shifting, on demand), and how they consume (form factors).  The recent phenomenon dubbed “binge watching” is a testament to this paradigm shift; previously, consumers had to come back each day / week in order to continue watching a show, but with OTT services they can consume under an “all you can eat” framework. On net, this reduces a consumer’s reliance on traditional Pay TV and has catalyzed a move to cancel services, or “cut-the-cord.”

The impact of “cord-cutting” has been felt throughout the industry – a notable example is ESPN. Once viewed as the “crown jewel” of Pay TV, it commanded high rates due to its ability to single-handedly drive cable / satellite subscriptions. However, it has experienced subscriber count fall by an average of 300,000 per month the past few years, with October 2016 being its worst month in company history, losing 621,000 subscribers.

Similar losses have been noted across the major cable / satellite providers, with most industry experts attributing this to the rise of OTT services. In response, traditional media companies have launched their own standalone streaming services, such as Dish Network’s Sling TV and AT&T’s DirectTV Now, which only further fragment an increasingly crowded space. See Exhibit 1. 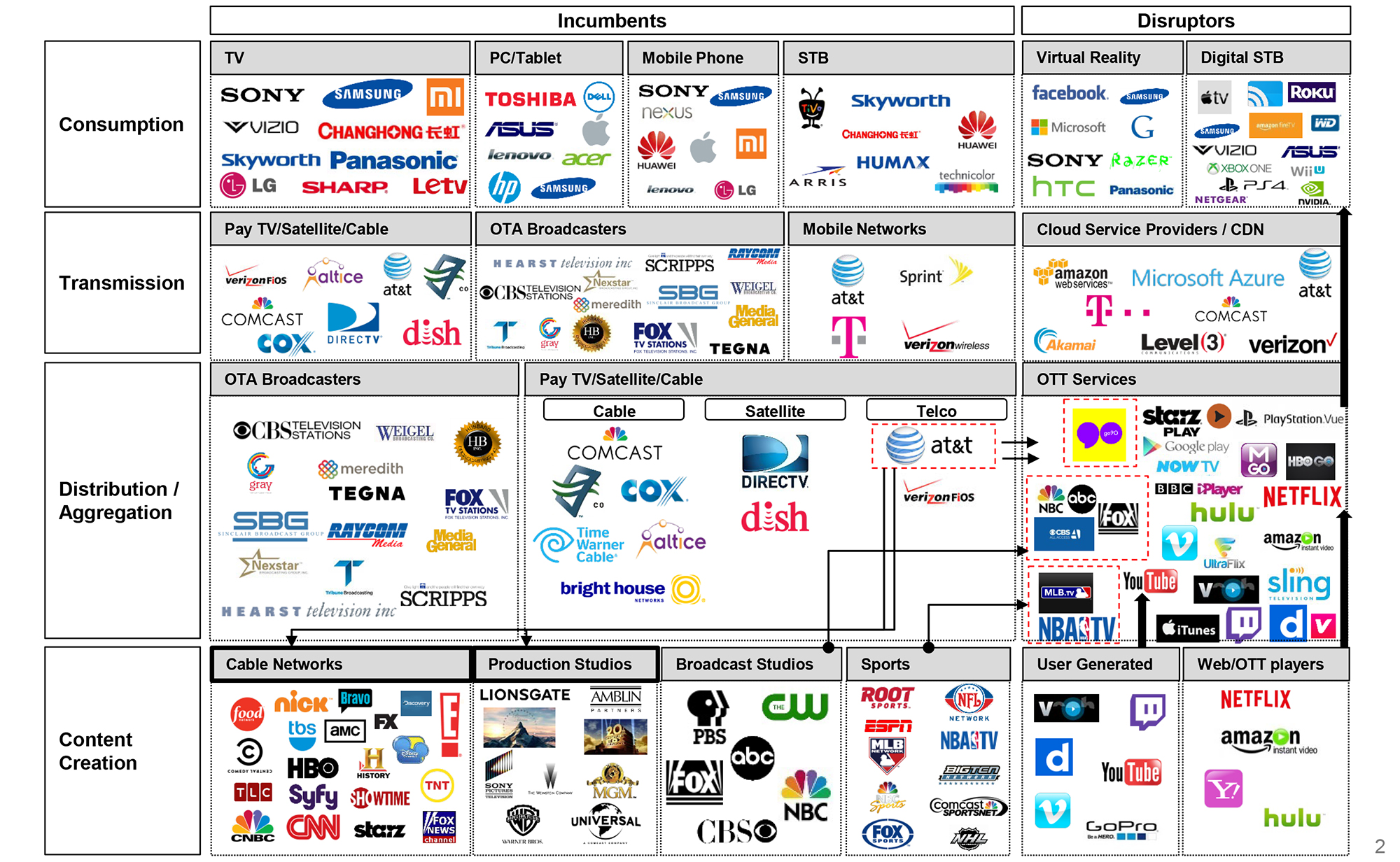 An indicator of both nascence and attractive profit pools, the OTT market segment has become crowded, with players across the ecosystem attempting to build their own OTT services. Networks such as CBS, pure-play content creators such as HBO and Starz, sports leagues like the MLB and NBA, and even telecommunications players such as Verizon have announced their own OTT services.

This segment of the market is still emerging and it is unknown which services will survive, but one potential, yet untested, business model is a bundle of multiple OTT services and platforms offered as a single consumer package, essentially leveraging a similar model that MSOs and Pay TV players offer today.

There are also changes occurring at the consumer end of the ecosystem – the rise of OTT has meant the hardware that cable and satellite companies typically supply may no longer be necessary. Rather, digital set-top-boxes such as Roku and Google Chromecast allow consumers to watch their OTT services on their TVs and increasingly, Smart TVs have these capabilities embedded and pre-installed, requiring no consumer intervention.

Additionally, other form factors and devices, such as gaming consoles have started including integration of Netflix and other OTT services onto their app ecosystems, further contributing to the paradigm of a fickle media consumer.

Outside of the proliferation of OTT services, the competitive dynamics of the ecosystem have forced distributors to seek out backward vertical integration to ensure direct control over content creators. While broadcast networks (CBS, ABC, NBC) have always had their own studios producing content, other distributors are now joining the fray.

Prominent examples of this include Comcast’s deal to buy NBC / Universal in 2013, along with its subsequent acquisition of DreamWorks in 2016, Netflix’s long-term goal of having 50% original content on its platform, and the recently-announced blockbuster acquisition of Time Warner by AT&T (pending regulatory approval). Vertical integration has potential to afford media companies targeted consumer access which facilitates improved advertising placement and revenues.

What about the Broadcasting Groups?

Often ignored when discussing the evolution of the ecosystem are major broadcasting groups – players like Sinclair Broadcast Group, Media General and TEGNA who own and operate local TV stations affiliated with the major networks (ABC, CBS, NBC, FOX, etc.) across the country. In light of the evolving dynamics, across the value chain from content creation to consumption, these players have pegged their hopes on the next generation broadcast standard, known as “ATSC 3.0.”

In short, this standard would afford broadcasters the ability to better utilize existing spectrum allotment, enabling the pursuit of higher-quality channels (4K, HD, HDR) or extending the reach of their footprint (i.e., towers) and more context driven, targeted advertising.

The Ecosystem and its Future

Undoubtedly, OTT’s path of disruption across media and entertainment will continue and consumer behavior will play an integral role in the shift of profit pools and market shares from traditional media to OTT. We expect to continue seeing media companies rush to develop competing direct to consumer OTT services, testing out a range of business models, and major distributors will continue to seek out compelling content assets or organically invest.

As the ecosystem evolves, complexity will become the “new normal” as non-traditional players like Netflix competing head-on with incumbents such as Comcast – the ultimate question will be who or what group will be best positioned to exploit the shifting ecosystem?