OTT Business Models – Not everyone should be like Netflix

Abstract: Over-the-Top, or OTT, platforms are currently all the rage in the media and entertainment industry as every media company, content creator and distributor fights for viewers in an increasingly crowded field. Following the success of Netflix, most new OTT services have modeled themselves after it, but Pay-Per-View and advertising based models are also prevalent. Through all of this, content remains king, possibly even more so than before as the contract-free nature of OTT means customers can add and drop services as they like. As the hype behind OTT wears down, we will see business models evolve and hybrid advertising –subscription models will likely become the standard. 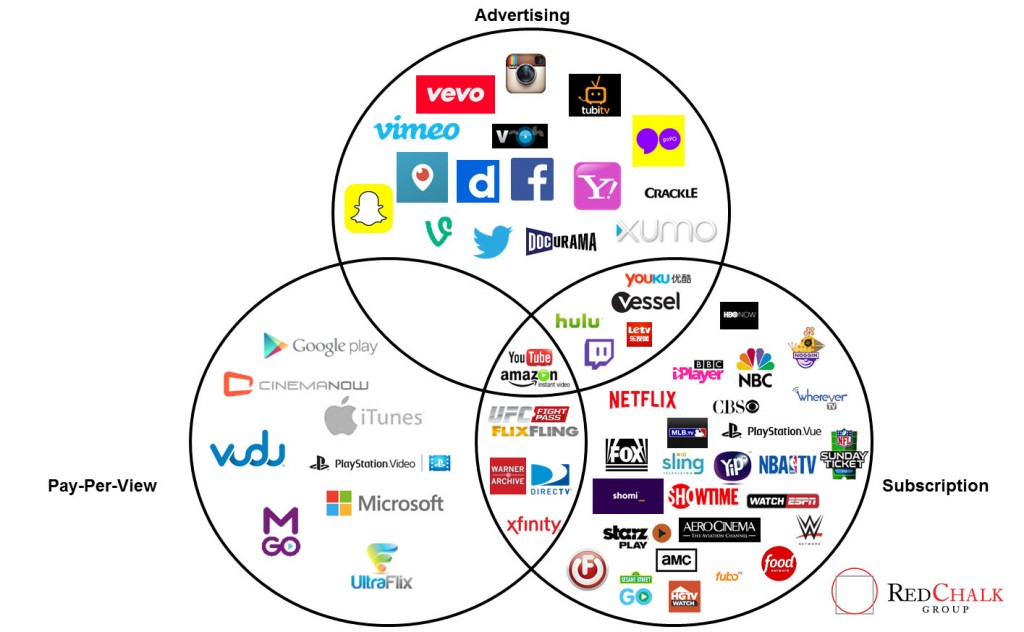 The OTT landscape is exploding as companies scramble to get into the media and entertainment industry’s hottest segment. Companies ranging from broadcasters like CBS to satellite and MSOs  like Comcast or Dish and even Telcos like Verizon have all recently launched their own OTT services. While the concept behind these services is the same, the business models used to monetize content are very distinctive. Cable companies like Comcast offered OTT content years before it became popular in the form of “on-demand” services, but have recently expanded their offering to include live content that was formerly limited to Pay TV. These models typically use OTT services to entice customers into signing a long-term contract and drive additional revenue through PPV purchases.  The dominant model is the subscription-based model that Netflix and Sling use, which appeals to customers through its enormous content library and low contract free price. The second model is an ad-based model, similar to what YouTube and Hulu primarily use. This rewards having popular content and makes it more accessible to the consumer. The last major model is a pay-per-view model, which what services like Ultraflix and Comcast On-Demand offer. This model has the highest revenue-to-content ratio, but will only work if the content provided is something that consumers are truly willing to pay for. There are some services that offer a mix of the models, such as Amazon, who offers basic OTT service with their Amazon Prime package, but to unlock certain, more popular, content a customer needs to pay-per-view.

A Service is only as Good as its Content

The recurring theme running through all of these models is the fact that you need content that consumers want to see in order to be successful, as Netflix’s lackluster launches in Asian markets attest to – even the cheapest service won’t have any customers if there’s nothing worth watching. However, if you do have highly-watched content, akin to HBO’s Game of Thrones or Netflix’s House of Cards, the model that maximizes your revenue would be the subscription model. The reasoning behind this is the fact that a customer is willing to pay the price of an entire content library to only view one part of it. In an ad-based model , the service provider will only be paid based on the viewers of that particular show, not the entire library and in a PPV model the price can be set equal to a monthly subscription price, but there is no opportunity to drive additional revenue beyond the single viewing.  An exception to this would be a large one-time event such as the Super Bowl or the World Cup final, where people will be winning to watch just because it’s popular. In that case an advertising model could be better, as advertisers are willing to shell out extreme amounts of money to reach a uniquely large audience.

The Future of OTT

Looking ahead, while all three models will continue to exist, subscription-centric plans will continue to dominate the market as advertising will likely be limited to hybrid subscription models. As more and more people move away from traditional advertising channels, advertisers will be forced to adopt linear ad insertion to more effectively target certain groups and demographics, as opposed to the “one size fits all” type of advertising of traditional Pay TV or work to insert advertising into the content itself. This movement towards hybrid models can be seen through Hulu and YouTube, two advertising – based OTT services that have added subscriptions for their most popular content. PPV will likely remain focused on one-time and niche content, since OTT technology has made the storage and distribution of content cheap and reliable, allowing content providers to offer their entire library of content instead of trying to pick based on ad revenue or popularity. The stability of subscription revenues makes it the preferred model of OTT players and allows them to leverage massive content libraries to keep customers happy as they work to produce the next big hit