We explore the basis for the Qualcomm-NXP deal and its strategic implications.

ABSTRACT: Qualcomm’s blockbuster $38.5B deal to acquire NXP is a strategic bet that affords Qualcomm a leadership position for chips powering the next wave of connected devices – connected cars, infrastructure, and the broader “Internet of Things” ecosystem. Armed with a reinforced patent portfolio and market-leading semiconductor and SoC position, Qualcomm will seek to replicate its successful mobile business model linking back to the CDMA smartphone industry, whereby Qualcomm generated revenue from the entire mobile ecosystem, regardless of its chipset supplier position.

Qualcomm has long held the position of “foundational R&D powerhouse” behind the $500B smartphone and telecommunications industry – their Snapdragon processors power flagship smartphones to budget feature phones with over half of all global phones produced leveraging Qualcomm LTE baseband chips.  Of course, in addition to their market leading semiconductor design, Qualcomm has generated lofty revenues with attractive margin profiles through a global licensing program that has extracted royalties across the telecommunications ecosystem.

Despite Qualcomm’s successful legacy, its leadership position has been fundamentally challenged. A combination of factors, including consolidation in the number of OEMs (e.g., Apple, Samsung, and Xiaomi), an aging patent portfolio, and governmental intervention have put pressure on its licensing revenues, a fact that has been incorporated into its equity valuation.

On the chipset and processor side, Snapdragon’s position is under assault. Established players such as Mediatek, the enabler of the fragmented local ODM market within China and East Asia, Chinese players such as Spreadtrum (with notable Qualcomm competitor Intel investing in 2014) and even OEMs seeking to vertically integrate or fragment their supply chains have further challenged Qualcomm.

Faced with mounting pressures in their core market with no sign of relief, Qualcomm’s $38.5 billion acquisition of the Dutch company NXP Semiconductors N.V. is a high-risk, high-reward strategic move to facilitate Qualcomm’s evolution beyond the increasingly competitive core, smartphone market and to the forefront of the next big wave of connected devices – connected cars, infrastructure, industrial assets, and the broader “Internet of Things” (IoT) The combined entity will consolidate the semiconductor segment of the IoT value chain (see Exhibit 1) and thus creates leverage by way of scale, go-to-market resources, R&D spend, and innovative, vertically specialized semiconductor driven solutions. 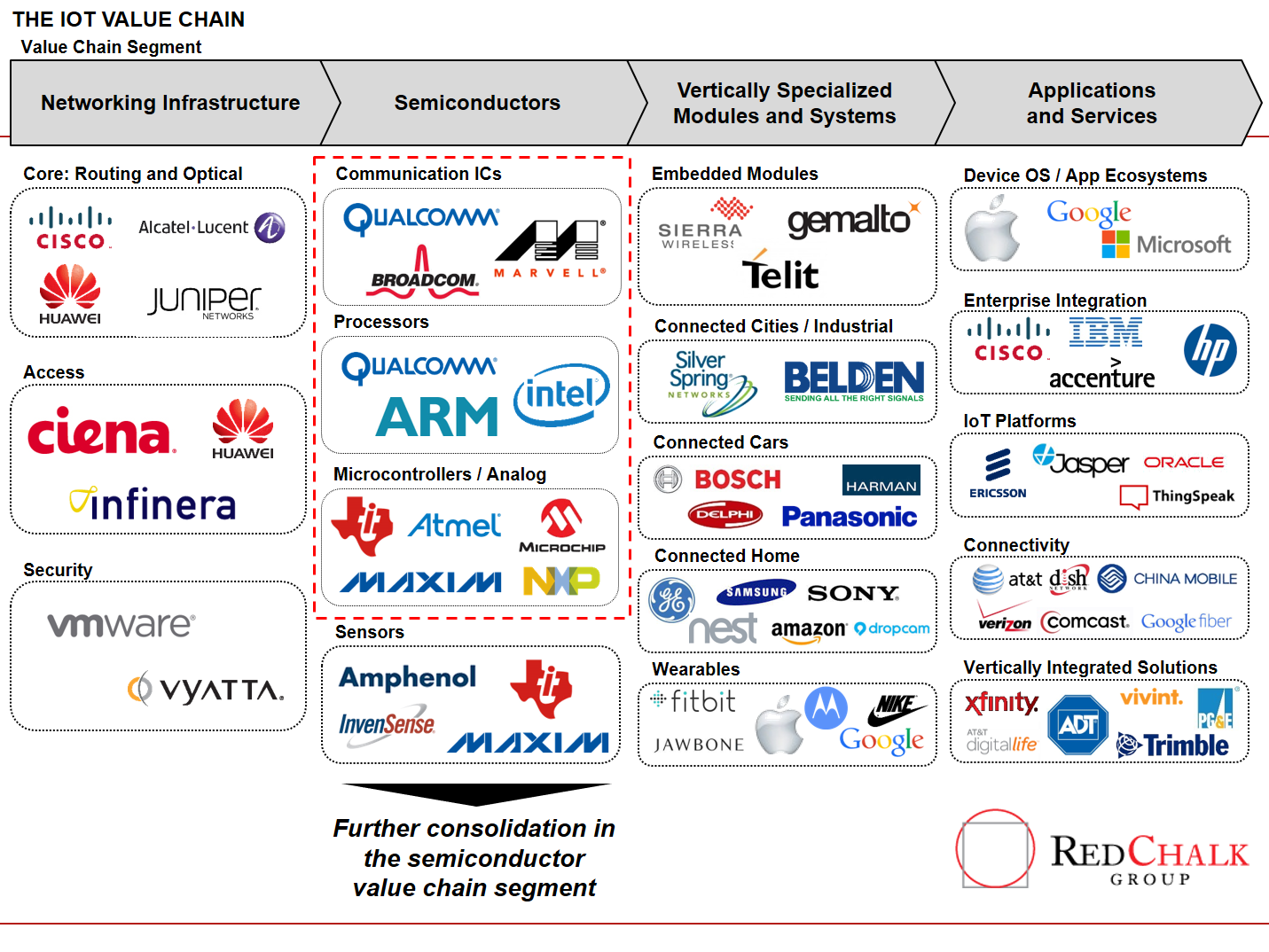 As reported by IHS, NXP is the leading global supplier of automotive semiconductors, touching all aspects of the car from ADAS to networking and powertrain components. NXP also generated ~25% of annual sales from semiconductors used in industrial equipment, demonstrating NXP’s strong position across both of these growing markets (i.e., the connected car and the industrial internet of things).

The data proliferation, efficiency gains, and prosumer/consumer expectations are positioning these technology themes and market opportunities to scale rapidly over the next decade and create as many revenue opportunities as smartphones afforded ecosystem participants in the past decade. As context, Gartner forecasts an installed base of over 250 million connected cars and over 8 billion non-consumer IoT devices by 2020. Qualcomm-NXP will be best positioned to capitalize on these opportunities as these devices will require on-device processing power and considerable connectivity, a design architecture and platform capability that Qualcomm is intimately familiar with. The combination of Qualcomm’s expertise in designing chips and NXP’s strength in the auto and industrial IoT verticals may create a vertical specialist with horizontal capability that could dominate the market.

From a licensing perspective, Qualcomm has already announced the Avanci initiative to license patents into these two spaces – if a patent white space existed before the NXP acquisition, there is little probability that such a white space will remain going forward. The combined Qualcomm / NXP patent portfolio will have over 30,000 issued, in-force, US patents: notably, over 10,000 via the acquisition of NXP.

It logically follows that Qualcomm will leverage a variant of its smartphone licensing model into burgeoning industrial IoT and connected car markets. If they follow the pure-play smartphone model, Qualcomm will offer semiconductor chips to device manufacturers while also offering licenses to a large patent portfolio that covers most, if not all, of the technologies manifested in the chip. Device manufacturers will have the option of either purchasing the chip and the license to the portfolio that comes with, or buy the license as a standalone option while seeking another supply chain vendor to provide the chip. As demonstrated through the success of the smartphone model, such a model would once again, render a combined Qualcomm-NXP a market “tracker” for the growth in device oriented, connected devices.

The deal, expected to close in 2017, still has to overcome regulatory hurdles and the two companies need to successfully integrate before real synergies emerge. However, the combined entity affords Qualcomm a strategic roadmap that has the potential to dominate the IoT space for years to come.