Sports broadcast contract values have ballooned in the past decade – and players like ESPN may end up holding the bag.

It seems as if no matter where you turn, the end of Pay-TV is nigh. Myriad factors, including cord-cutting, millennial viewership, and disruptors like Netflix or YouTube, are collectively placing pressure on the traditional Pay-TV model creating a struggle for legacy players who are attempting to retain relevance, viewers, and advertisers. In this evolving media landscape, legacy players are finding that their core product, TV programming, is under attack from an ever-expanding set of competitors that are spending heavily to pry viewers away. As a result, TV’s best content assets – live sports – have become increasingly important to legacy players.

Gone are the Good Old Days

For legacy TV, gone are the days where content choices were limited to a handful of channels, where M*A*S*H could draw 100M viewers and Dallas could draw more than the Super Bowl. Today, the perennial ratings king American Idol is gone and similar programs like America’s Got Talent are not nearly as popular; the top-rated non-sports program doesn’t reach 20M viewers. With the advent of cable, unique content available to consumers has proliferated rapidly and has reached a point of acceleration in the age of YouTube and Netflix. As a result, networks are struggling to find content that can consistently draw audiences outside of live sports, as illustrated by the widening gap between sports and non-sports entertainment. (See Figure 1) 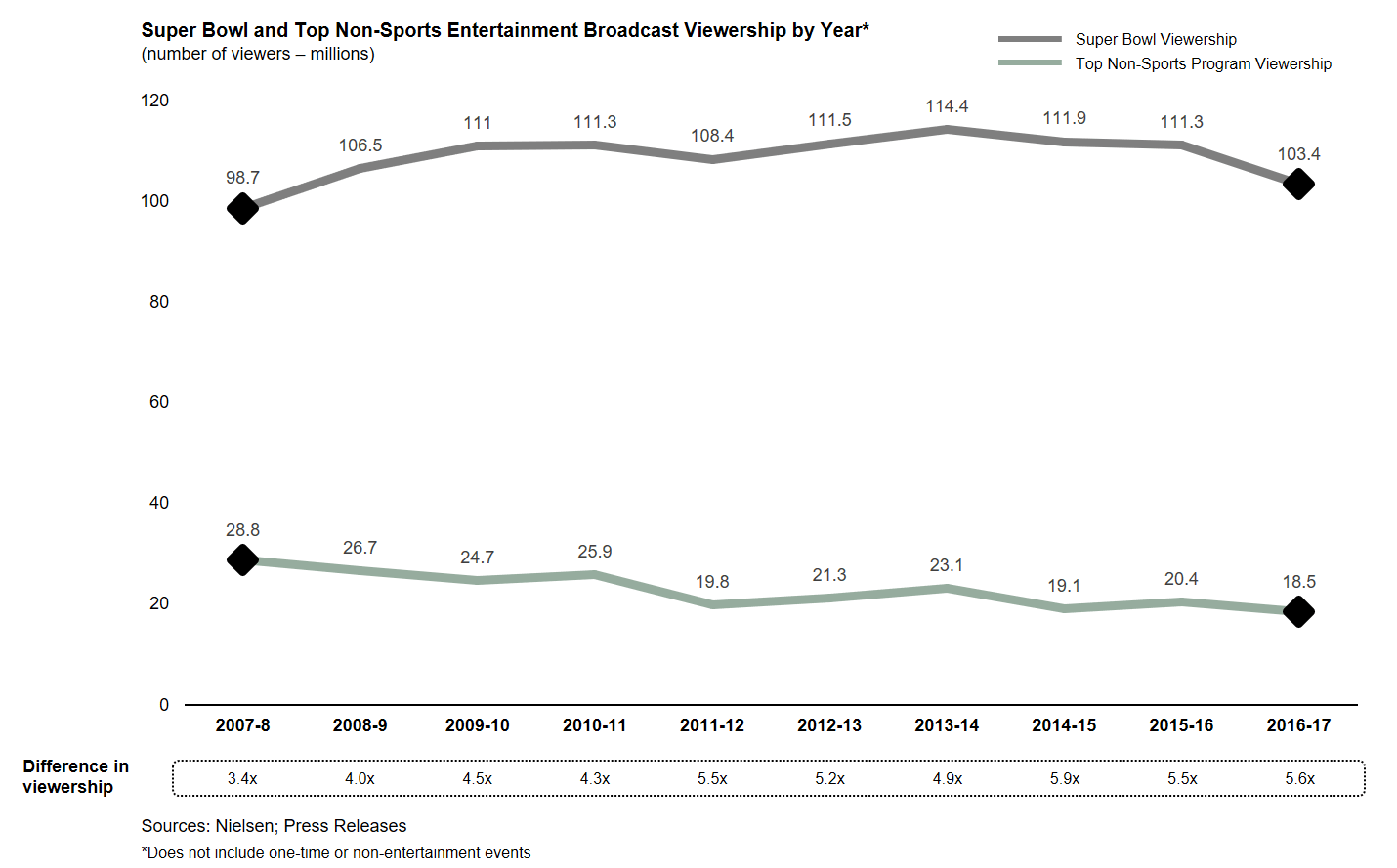 While viewership for the Super Bowl has declined over the past few years, there has been a similar decline in TV viewership that has only highlighted the importance of live sports content – even with a 7% decline in viewership for Super Bowl LII, 9 of the top 10 largest TV broadcasts in history are the Super Bowls from 2010 onwards.1 It’s no wonder that the cost of sports rights have ballooned in recent years and observers are wondering when the “bubble” will pop.

In an increasingly turbulent time for legacy media, sports rights have provided solace, a solid foundation to turn to when other content categories struggle. Sports leagues have realized this and jumped on the opportunity to massively grow the size of their broadcast rights fees – the value of the most recent national broadcast rights for all major sports leagues were more than double their prior amount. (See Figure 2)

The doubling of contract values underscores how valuable sports have become to legacy players – the renegotiated contract terms generally stayed the same, with no major changes in number of games, playoff games, or even digital rights, as evidenced by the NFL’s decision to sell Thursday Night Football digital rights to Twitter / Amazon. The networks are effectively paying more than double for the same product and may even see viewership declines (i.e., NFL). However, even in a market where rights fees are exploding and are increasingly exposed to risk of viewership declines, media players have still locked up billions of dollars into all types of sports contracts to shore up weaknesses in other content categories.

What Goes Up…Sometimes Comes Down?

The unprecedented growth in broadcast fees has raised questions about the sustainability of such fees; however, if Fox’s recent bid for Thursday Night Football rights is any indication, contract values have not peaked yet. This growth is also not limited to just major sports – networks and cable channels have been locking up sports rights to a whole litany of sporting events and leagues. (See Figure 3)

Many of these contracts represent double or triple their previous values, and again validate the importance networks and cable channels are placing on live sports. After the Fox / TNF deal, the rights landscape is likely to remain calm for a few years at the national level, but even this lull is driven by the fact that all major content assets have already been locked up. However, starting with the expiration of the MLB contract after the 2021 season and the NFL contract after the 2022 season, there will be another flurry of negotiations – but with cord-cutting and other trends slowly bleeding away the Pay-TV customer base and viewership, it remains to be seen if contract values can continue increasing or if they will finally start falling.

Digital content players like Amazon should not be discounted either – with massive user bases and large wallets, players like Facebook and Amazon could represent a significant threat to pry sports rights away from legacy players, particularly with continued development and piloting of live sports streaming (e.g., TNF on Twitter / Amazon). Amazon may already be making its move internationally, as there have been rumors of its involvement in the upcoming English Premier League rights bidding, where it is going against legacy players like Sky and BT.2

One player that has been particularly active in the sports rights arena is ESPN – starting with the successful bid for “Monday Night Football” in 2005 and launch of the SEC Network in 2006, ESPN has been transforming from a news / highlights-driven network to one focused on live sports. (See Figure 4)

ESPN has been particularly aggressive in recent years, buying rights for a significant premium at times or pursuing rights that may be more niche / targeted. Case in point, when ESPN renegotiated its “Monday Night Football” contract in 2011, it paid $15.2B in total or $1.9B yearly to renew those rights – in contrast, NBC is only paying $950M a year for “Sunday Night Football”. However, in terms of viewership, ESPN averaged 10.8M in 2017 whereas NBC averaged 18.2M.3 Not only is ESPN paying more than double NBC’s price, they are also drawing 40% less viewers.

In the past, the advantageous economics associated with ESPN allowed them to overpay and still generate solid profit, but as cord-cutting and demographic shifts continue to cut into ESPN’s subscriber base, the value of their sports contracts – nearly $5.7B a year – become increasingly tenuous to maintain. Ultimately, ESPN may serve as the poster child for this era of sports broadcast rights – where “less is more”.